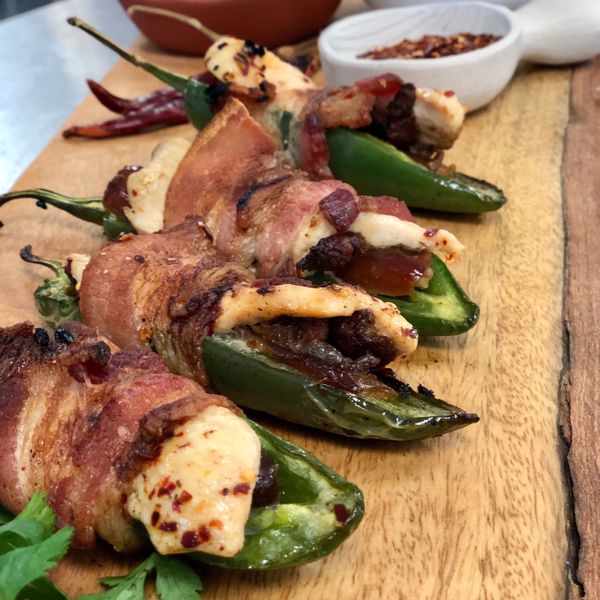 Mmmm, bacon, dates, chorizo, and peppers. The perfect mix of sweet, salt, fat, and spice! Mouth watering perfection! If you don't like this filling, you can use anything you like. You'll also end up with leftover chorizo for whatever you'd like, or you can start this custom cook from the searing step after the sausage step and make more batches.

You can make up to 6 poppers this way, but I've found 4 gives better results on the bacon.

Instructions:
1. Put the chorizo in zone 2 of a metal tray, flattening to form a patty that goes across the whole tray and is up to 1/2" thick.
2. Place the tray on the top shelf and start the program. We'll prep the rest of the ingredients while the chorizo is cooking.
3. Cut the peppers in half lengthwise, leaving the back/stems on to help hold in the filling. Remove and discard the seeds.
4. Cut the dates in half lengthwise. Line the inside of the jalapeños with dates, sticky side touching the jalapeño. Press down on the skin of the dates so it doesn't take up much space in the pepper.
5. Cut the bacon in half. I prefer to use the less fatty side of center cut bacon for the poppers, but it's up to you.
6. Cut the chicken breast, against the grain, into 4 slightly less than jalapeño-sized thin slices, about 1/4" thick.
7. Wait for the chorizo to finish.
8. Drain the fat from the chorizo and mix it and break it apart so it is in crumbles.
9. Put a spoonful of chorizo in each jalapeño, on top of the date.
10. Place a slice of chicken over the chorizo on each jalapeño.
11. Season the chicken with salt and red pepper flakes. Unless your chorizo is really salty, then you probably don't want salt.
12. Wrap each jalapeño with a half slice of bacon and place a toothpick through the popper/bacon so that it won't come off the pepper. The bacon's job is to hold it all together so wrap it tightly.
13. Place the 4 poppers in zone 2 of a cool metal tray, spaced about 1" apart.
14. Put the tray on the top shelf and you're done!

I like to put these on a rack or on some paper towel to remove a bit of the bacon grease after they're done. They should be served once they are cool enough to eat. Ideally within a few minutes.

How do I log in to my Brava?
False
False